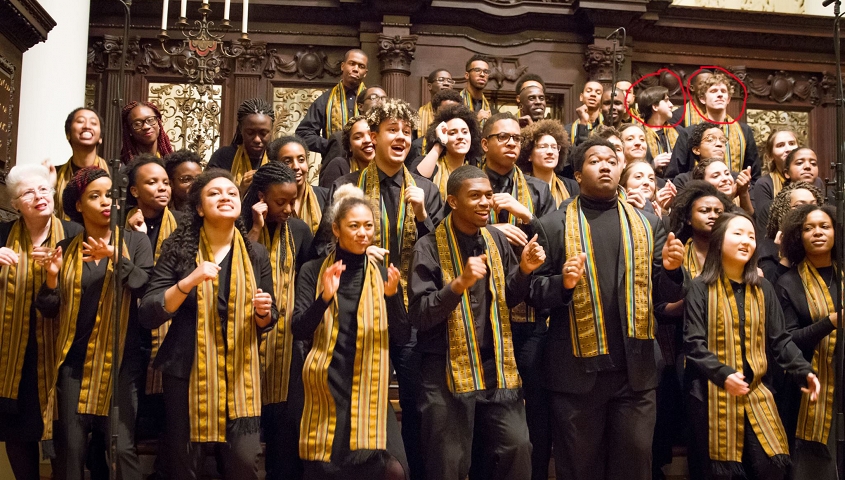 Photo of (L-R) Fellow alumni Max next to Owen at a Kuumba Singers Performance.

When I joined BCC in eighth grade, I couldn’t have predicted the impact the chorus would ultimately have on my life. Having sung in various groups since the age of seven, I must have seen the Young Men’s Ensemble as just another stop in my vocal journey. You show up, sing for an hour or two, and go home. Every so often you perform a concert and your Mom gives you flowers. I knew the drill. It’s hard to pinpoint the exact moment I realized BCC was different, but throughout the following five years, the experience I had was so much more than harmonies, sixteenth notes and Mom’s smile from the audience. Although I certainly credit all the hours spent rehearsing with my development as a singer, musician and performer, the most valuable resources I gained were the people I met, the conversations I had, and the community I was a part.

BCC’s mission is to use the power of music as a catalyst for social change, something I took part in every time I walked into the practice room. My fellow singers comprised a group more diverse than I was accustomed to, coming from a well-off, private school background. Being in a room twice a week with kids representing all the different types of families living in the Boston area allowed me to form friendships with many students that I may have otherwise never connected with. The differences that separated us were dwarfed by our shared love of music. Dwarfed, but not eliminated. The perspectives and stories I witnessed were often quite different than my own. Part of being in BCC is about sharing and recognizing the complex elements that make us who we are. The chorus is a space where everyone can feel comfortable talking about how factors such as race, gender, sexuality or socio-economic status shape our lives and views of society. It wouldn’t be rare for a rehearsal to morph into a twenty minute conversation on a current event or social justice concept. Rather than distracting, these discussions would often directly relate to the song we were practising, and the messages we were trying to send with our music. The ideas surrounding race, wealth and privilege, for example, certainly came to mind when we were performing on tour in Vietnam and Cambodia to groups of children at schools or orphanages. The memories I made on that trip will last me forever.

Sadly, my time with BCC had to come to an end. In 2014 I graduated highschool and went off to college. Last fall, for various reasons, I took a year off from my education in St Louis and got a job back home in Boston. Most of my high-school friends were at out of state schools, so I was nervous about how my social life would fair not being surrounded by a group of peers. Fortunately for me, I had my BCC family to lean on. I quickly reconnected with my friend Max Anthony, who attends Lesley University, just blocks from my house in Cambridge. I had known Max for years, and had bonded with him over countless chorus events, including holiday concerts, performing on Good Morning America, and touring internationally. 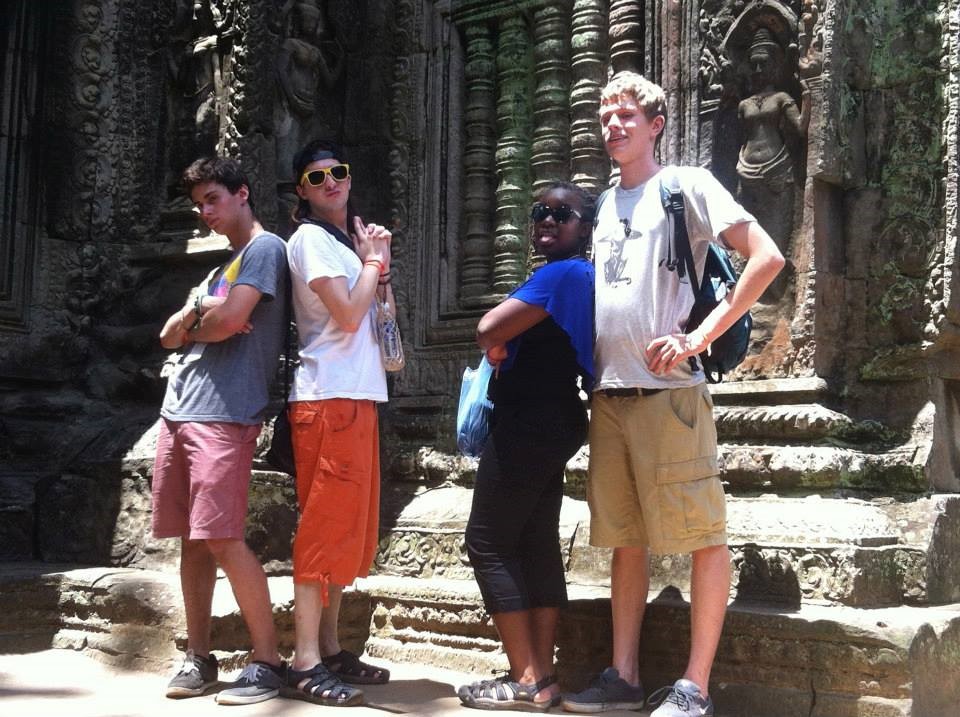 Photo of Owen and fellow singers at Angkor Wat in Cambodia.

Max grew up near north station in Boston, and attended the Boston Arts Academy for high school, making him someone I probably never would have met if not for BCC. Over the past year, our friendship has deepened. We have shot movies for Max’s film class, installed an urban garden art piece and attended various concerts and galleries around the city. In September, Max introduced me to the Kuumba Singers of Harvard College, a group that exemplifies many of the same qualities that made me love BCC. Historically Harvard’s first all-black student group, the Kuumba Singers specialize in gospel and soul music, including some of the exact same songs I had learned years before. Max and I had the privilege of singing with Kuumba during the fall semester, and performed at many events including Harvard’s W.E.B. Du Bois medal ceremony, the annual christmas concert, and an AIDS charity dinner at Harvard Business school. The business school event was especially interesting, as it fell the day after someone had vandalized the portraits hanging in the building’s main hallway by crossing out the faces of all the faculty of color with black tape. Being in a mostly black choir, we discussed the impact of the vandalism and how it would affect our performance to a mostly black audience. Talking about racism like this can be challenging, and as a white person, it can be tempting to look the other way and remain silent. I have learned, however, that although it may be uncomfortable at first, having these conversations is a deeply rewarding process that can result in a better understanding of the world we live in. For me, this process was kick-started at BCC and carries on to this day. 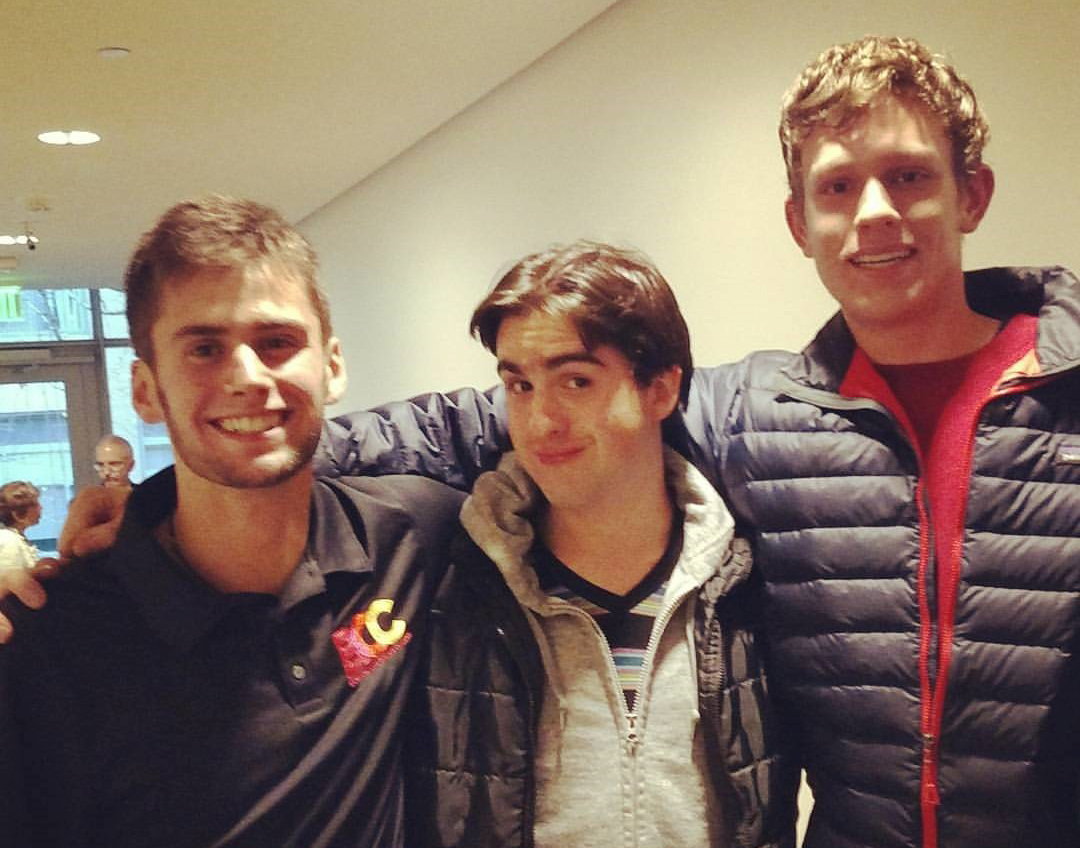 Photo of Max and Owen as alumni returning to a BCC concert to support fellow singer Niko.

I am back in school now, majoring in Electrical Engineering and hoping to minor in African-American studies. St. Louis offers a unique story about race in America, as it remains one of the most heavily segregated cities in the US. I am singing with the Washington University Chamber Choir, and plan to travel with them this summer on tour to Estonia, Latvia and Lithuania. I can only imagine what lies ahead!