BCC Alumni Spotlight: Isabel Koyama: From Boston to Bhutan: A Reflection on the Impact of BCC 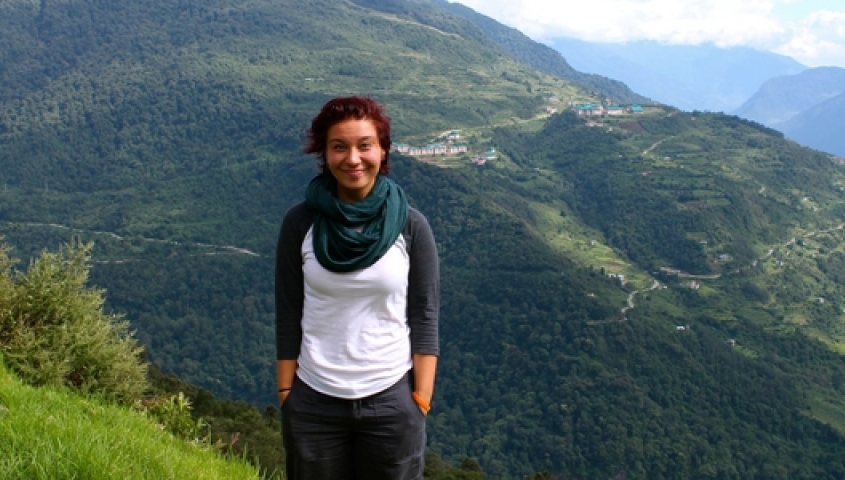 Somewhere in the dusty corner of my basement lies an overflowing box labeled "Izzy Sentimental" which contains precisely ten years-worth of BCC attire. Now developing a musty smell from years of neglect, these sweat-stained BCC clothes are folded in a red, white, and black pile of sweatshirts, sweatpants, long sleeved polos, short sleeved polos, white oxford shirts, blue and red T-shirts, tour shirts, and worn-out black flats, to name a few. I return to this box ever so often, sometimes intentionally, other times by mistake. Every time I stumble upon it, no matter the reason, I'm hurled back into a childhood of very vivid, formative, and emotional memories. It is indeed a highly sentimental box - let's look inside.

One precious piece of clothing that can be found at the bottom is a puny, vibrant red blazer, with golden buttons and thick, restricting shoulder pads. I wore this vintage artifact during my first Martin Luther King Day performance in 2003, when I was just 9 years old. Although I had participated in the chorus' initial pilot program, this was my (and the chorus') first official year, and our first real concert. We sang two songs that night, hardly occupying a quarter of the stage. We had small, scared voices and stiff shoulders (made worse by the shoulder pads). I remember squinting into the blinding stage lights, clenching my fists into sweaty, nervous balls of stress. We were young and inexperienced, but even then, we had spirit.

Once I put on that red jacket, I figuratively never took it off. The BCC uniform became an extended part of me, an integral facet of my identity and person hood. Over the years, BCC grew and changed immensely - the organization expanded every year, introducing new training choirs, undertaking on more and more important concerts, embarking on national and international tours, and moving to its current space on Shawmut Avenue where the choirs and staff could coexist. All the while, I grew and changed in parallel, especially in my level of musical aptitude. The uniforms changed too - red blazers evolved in style and deepened in color, black ties were discontinued, and black skirts for girls gave way to black dress pants. In all of these uniform variations we sang hundreds of concerts, which now blend together in my memory as an amalgamation of random moments, sounds, feelings, and images. From singing at an extravagant golden church in Mexico to a small town church in rural Vermont; from intimate Boston homes to nationally televised Red Sox Games, Dr. Martin Luther King day performances, and the Democratic National Convention. From Chicago to Jordan, Washington D.C. to England, we sang with that same intangible spirit that had expressed its potential during our first concert in 2003.

As I spent the last four months studying in Bhutan for the Fall semester of my junior year of College at Bates, I found the social and musical skills I learned during my BCC years to be more valuable and relevant than ever. Musically speaking, my ear-training and theory skills enabled me to teach a student's music literacy class everyweek, in which we covered solfege, major and minor scales, and how to sight-read rhythms and notes. I also lead a musical workshop on group-singing strategies with an incredible chorus of blind Bhutanese musicians, which was a wonderful opportunity for both musical and cultural exchange. And through my summers of touring with BCC, I have cultivated certain ethics and social tools regarding international travel and cross-cultural interaction that allow me to immerse myself more fully in Bhutanese culture. BCC taught me that travelling is not about tourist attractions and pictures, but rather about making meaningful relationships and experiences - it is about celebrating and exploring cultural differences as well as similarities. And it is about navigating the careful boundary of trying to make a lasting impact without being offensive or invasive.

In the past few years, I have kept the Boston Children's Chorus close to my heart, often returning nostalgically not only to my sentimental box, but to youtube videos and old pictures from my time in the chorus - I really miss it sometimes. But although I graduated from BCC three years ago, I am confident that the skills and values I nurtured in the chorus will have lasting residue as I continue to live and learn.