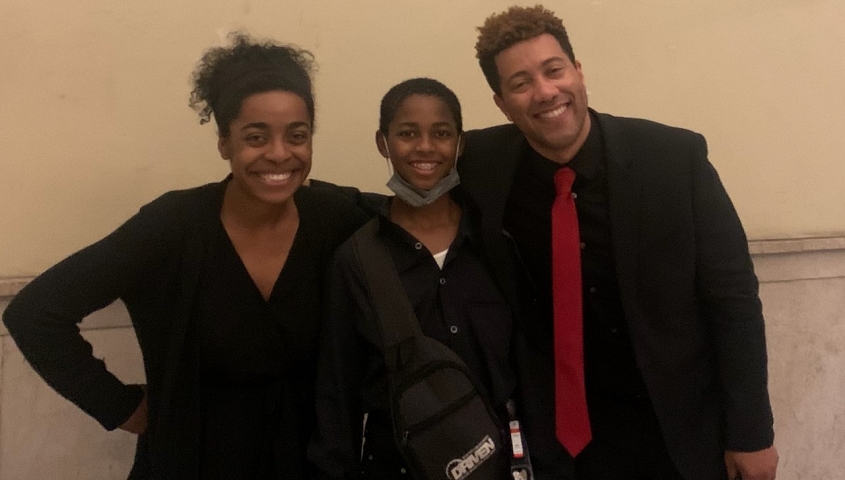 Congratulations to all those involved in Boston Modern Orchestra Project (BMOP) and Odyssey Opera's performance of Anthony Davis' X: The Life and Times of Malcolm X at the historic Strand Theatre in Boston including BCC’s very own Central Intermediate Advanced member, Jonathan H, and conductors Mr. Griffith, & Ms. Cooper!

"As a Central Intermediate Advanced member of the Boston Children’s Chorus, Jonathan Harris caught the attention of conductor Krystal Morin. When she heard that Boston Lyric Opera was in search of talent to portray Champion’s title character in his childhood, she suggested that Harris should consider it." - CS Music

"Along with a new generation of adult cast and chorus members, Anthony Davis says the Boston production needed a performer to channel the tenderness of a very young Malcolm. It's not really a boy soprano part like we might find in Benjamin Britten's work or something like that,” Davis recalled. But I said, 'You need to find Michael Jackson from The Jackson 5 days — you know, 'ABC.' That's what you're looking for. They found that voice in 12-year-old Jonathan Harris, a Boston Children's Chorus singer from Brockton." - WBUR

"Jonathan Harris plaintively sang Malcolm as a boy, pleading for help from his mother after his father's death. And the chorus (Kenneth Griffith, choral conductor) was a unifying force throughout, participating in, amplifying, and commenting on the action." - Boston Globe

"Also involved were two members of The Boston Children’s Chorus, an organization that weaves together social justice and music education. Kenneth Griffith, the conductor of BCC’s Premier Choir, was the choral conductor for “X,” and Jonathan Harris, a 12-year-old singer from Brockton, played the role of young Malcolm." - Dorchester Reporter