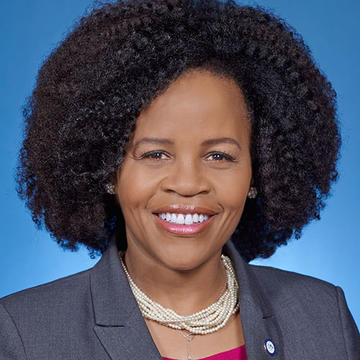 Named for the founder of the Boston Children’s Chorus, the Hubie Jones Award honors Jones’ legacy as an advocate for social justice by recognizing an individual with outstanding qualities who has dedicated her or himself to the betterment of Boston’s communities. The award celebrates a successful leader in their field, as well as a staunch advocate on behalf of the communities in and around the Boston area. The individual, who is making contributions to the social fabric of Boston in the areas of diversity and inclusion, also promotes a harmonious and inclusive environment for underserved populations.

BCC was honored to present Kim Janey with this award at the Hubie Jones Award Reception on January 20th for her tireless advocacy of Boston’s children for more than 20 years. Prior to being elected to the Boston City Council, Kim was a Senior Project Director at Massachusetts Advocates for Children, where she led efforts to advocate for systemic policy reforms that would ensure equity and excellence in education for students in Boston Public Schools, with a special focus on eliminating opportunity and achievement gaps for children of color, immigrant children, students who are learning English, children with special needs, and those living in poverty.

Kim understands the intersection between the lack of good schools and income inequality, the criminal justice system, and chronic unemployment. As a young girl growing up in Roxbury, she experienced the racial and economic disparities in our communities through our schools. Through her family, however, Kim learned the power of community organizing, resistance, and advocacy. She applied those family lessons in her career and in service to her community.

While many know Kim for her work in education policy, she is also very active on a number of boards and civic organizations. In 2009, Kim founded a neighborhood association in Roxbury and served as its president for the first four years. She is a member of the Massachusetts Women’s Political Caucus and the Boston Ward 12 Democratic Committee. In November 2016, she was elected to the Boston NAACP Executive Committee and she has served on MassVOTE’s board of directors for more than 10 years. Kim has been recognized for her service with a number of awards, including the Boston NAACP Difference Maker Award in 2015 and the coveted Sapphire Award in 2017.

Elected in a historic election, Kim became the first woman to represent District 7, which includes Roxbury, with parts of the South End, Dorchester, and Fenway. Her priorities include education, housing, small business development, and providing high-quality constituent services. With deep roots in Roxbury and the South End, Kim is committed to ensuring that every resident in District 7 has equitable access to opportunities and resources so that our neighborhoods are stronger, safer, healthier and more vibrant.

View photos from the event here!