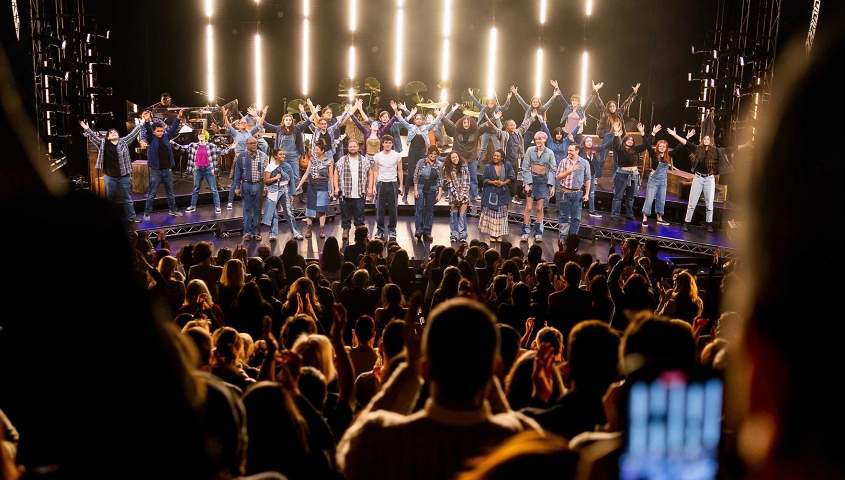 Young people, like those in the Boston Children’s Chorus, play vital roles in a production built around the spirited passion of environmental advocates (like Greta Thunberg) because they are leading the charge for change.” - Diane Paulus (via Harvard Magazine)

"The main cast is backed in several numbers by young people from the Boston Children’s Chorus, both singing, and dancing. Their enthusiasm and urgency as they sing lyrics that include “We want you to panic/We want you to act/You stole our future/And we want it back!” make your heart swell and hurt at the same time." - Cape Cod Times

"What's more, the addition of the Boston Children's Chorus adds a youthful buoyancy to the production, and Menzel's unique cutting vocals soar in her rendition of the title song." - WBUR

"The added presence of the Boston Children’s Chorus further drives the show’s message home, if not for our children, then for who? It is their future at stake" - Theatre Mirror

“The cast of 10 is backed by a three-piece band (the music director is David Freeman Coleman) and members of the Boston Children’s Chorus, who add vocal depth and, by their presence, enhance the sense of a generation demanding action.” - The New York Times

"Forte announces before a slew of kids (members of the Boston Children’s Chorus) stream onstage, ready for action. In the context of the show, “Panic” is directed at the adults of Outskirtzia, but it’s clearly a message for the audience as well: “We want you to panic/We want you to act/You stole our future/We want it back,” they bellow again and again, and the effect is heart-rending." - Boston Globe

"Best of all is the inclusion of members of Boston Children's Chorus who appear during the "Everything Goes Theater Day" and join in for the powerful "Panic." It is hard to remember a moment in the theater as immediate and powerful as this one." - Edge Media Network

"Children's impact is front and center in this powerful production... The stand-out performances of the evening came from the "children" of the show" - Broadway World

"I am extremely grateful for Boston Children's Chorus and the American Repertory Theater to have given me this opportunity to be able to perform and learn from such talented actors and actresses." - Mara Stein (via Peabody Patch.com)

"As one of the Boston Children’s Chorus members performing in the American Repertory Theater's production of #WILDMusical, Julia Sax gets to share the stage with Tony Award-winner Idina Menzel - an experience which has admittedly left the 16-year-old a little starstruck."- The Beacon Hill Times

"Graciela Rodriguez and her younger brother Gustavo Rodriguez, both Wachusett Regional High School students, are singing their hearts out as members of Boston Children’s Chorus. They are performing alongside Tony Award-winner Idina Menzel of “Frozen” and Broadway fame in Harvard University’s American Repertory Theater production of “WILD: A Musical Becoming” in Cambridge." - Landmark