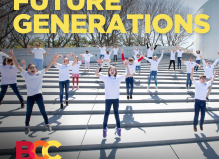 A Celebration of World Voices

Eight youth choirs from around the world will gather in London next April for the inaugural International Youth Choir Festival hosted by the National Youth Choir of Great Britain. Boston Children’s Chorus will represent the United States. The participating choirs will hold workshops and also showcase their talents to schoolchildren in the city, before holding a conference and performing together in a concert at the Royal Albert Hall.