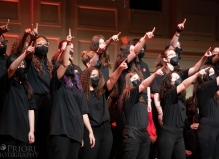 On Feburary 7, 2017, Senator Elizabeth Warren read a letter to the U.S. Senate - a letter that Civil Rights activist Coretta Scott King had written in 1986. Midway through King's letter, Senator Warren was interrupted and silenced by her fellow senators following a vote along party lines to force the senator to take her seat. That day, a three-word sentence spoken on the Senate floor became an inspirational message to women everywhere: "Nevertheless, she persisted."

Our 16th Annual Dr. Martin Luther King, Jr. Tribute Concert tells the story of the Civil Rights Movement's hidden women - from Coretta Scott King to Jo Ann Robinson of the Women's Political Council of Montgomery. Women have long been the creators and backbone of movements. We bring to light and celebrate the women who persisted and dreamed for a more just world.